A lady just walked by me in the work hallway, carrying a donut and a cup of coffee. I felt like Ennis when he saw Jack Twist pull up in the red and white truck after four years.

Well, maybe that movie scene doesn’t exactly translate. But still. The smell of hot coffee and the sight of chocolate donuts in the morning and every thing else becomes irrelevant. 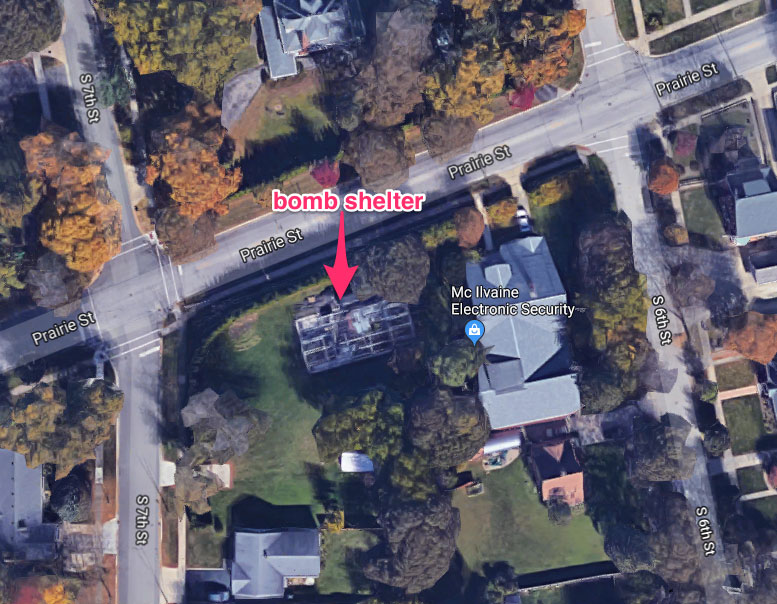 I’m always disappointed when I overlook the house with the bomb shelter on Prairie Street in St. Charles while driving to work.

I want a bomb shelter.

So apparently it’s a greenhouse and not a bomb shelter. A boy can dream, though.

It’s probably a good thing that I don’t have as much land as Cliff McIlvaine does. I was thinking on the way home from work that I’d have a railroad caboose and a pirate ship to go along with my underground bunker.

There’d be secret underground passageways connecting them all. And at the end of the last tunnel there’d be and extra large bed, a TV, and one of those little refrigerators you have to open with a key.

And then I’d have a taxi cab waiting outside the hotel with my very own cheese pizza. And then while eating said cheese pizza and enjoy a cab ride through New York, I’d perfect my Russian accent. Because I’ve been watching too much GLOW on Netflix.

“Russian cat only drink vodka distilled from wells outside Moscow.”

My Russian accent always ends up sounding like a bad Schwarzenegger impression. 😄 😢

I bet it’s not really a greenhouse. I bet it’s a SECRET BOMB SHELTER.

It’s hard to tell even from the street as he’s a row of that run the length of Prairie St. and half the 7th St block. 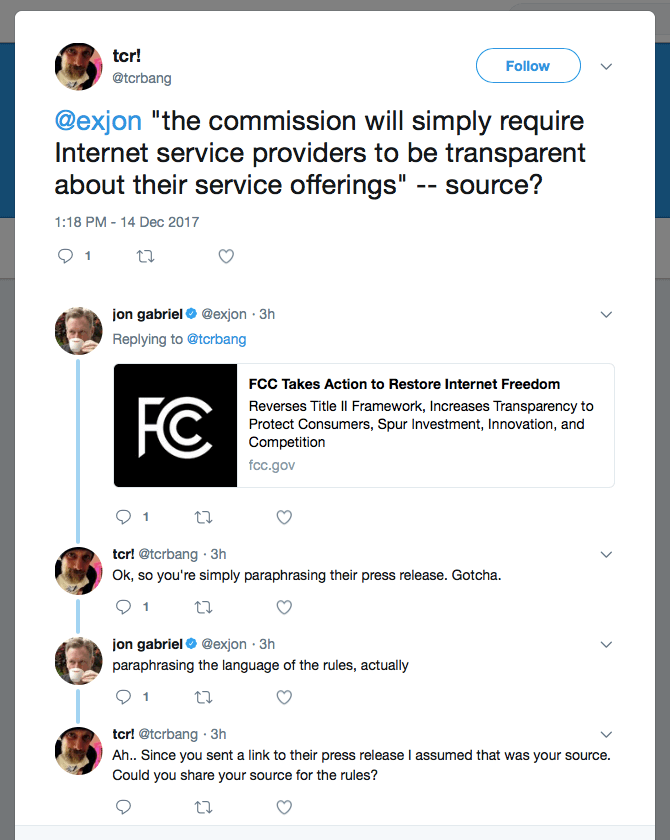 He would only offer a link to the FCC press release. Everyone who’s for ending net neutrality hasn’t given one valid reason on how it’s pro-consumers.

I only stumbled upon the article after Ajit Pai retweeted it. 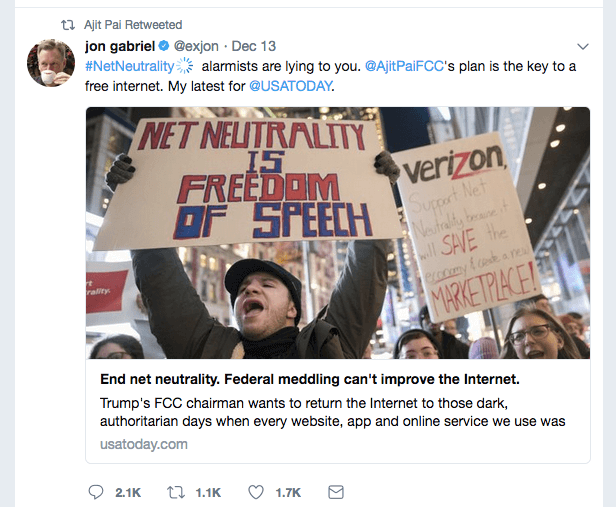 The “transparency” only means that the ISPs will need to publicly disclose what services they offer. They don’t need to be transparent when throttling Internet traffic or when they’re giving priority to the companies that pay them for access to the fast lanes.

Since Comcast and NBC are one in the same these days, you better believe that Netflix is going to be in the slow lane while NBC’s streaming shows are gonna be in the fast lane. Maybe if Netflix pays up Comcast will give them a speed boost. And is Netflix going to simply absorb this cost? Nah, they’ll pass it on to their customers.

Also, from earlier in Gabriel’s article:

Following decades of exploding Internet growth, the government interjected itself with a barrage of new rules to stop an imaginary threat. As Pai put it, net neutrality “is a solution that won’t work to a problem that simply doesn’t exist.”

This threat isn’t imaginary. Before Net Neutrality was repealed today T-Mobile had carefully been giving partners no-data counts for their services. AT&T was in trouble with the government for giving Dish special treatment on its network. Telecoms are always looking for ways to maximize their profits.

I wonder how much the big telecoms paid Gabriel for his article. 🤔

I also found it disheartening that Apple, Google, etc. were quiet today while the FCC were voting to repeal. They have deep pockets and can afford to pay to get their music streaming. Have you ever heard of Bandcamp? Maybe not, they’re smaller but they pay artists on their site 80-85% of however much people spend. I wonder if they’ll be able to keep going when Verizon smacks them with the throttle bill.

Thanks for the rundown. I love how you told him who he is.

I’m still hung up on the “imaginary threat” part, too. Who can forget the early 80s when the government broke up Ma Bell into smaller companies because of anti-trust violations. The telecoms aren’t do-gooders here. They’re cut-throat corporations.

The 8 companies Ma Bell was broken into have been buying each other and now we’re back down to three. One of them, Verizon, just bought Yahoo and AOL to be renamed Oath. How much priority are they gonna give their new Oath baby? As much as they possibly can.

Verizon owns their roads, their trucks, their goods. Websites like tcrbang.com will most likely be stuck in the coming traffic jams.

I’m sure glad that five people from the FCC got to vote on and determine the fate of Net Neutrality. Of course that’s just what Ajit Pai wanted, being the former Associate General Counsel for Verizon and all. His Christmas bonus depended on it. 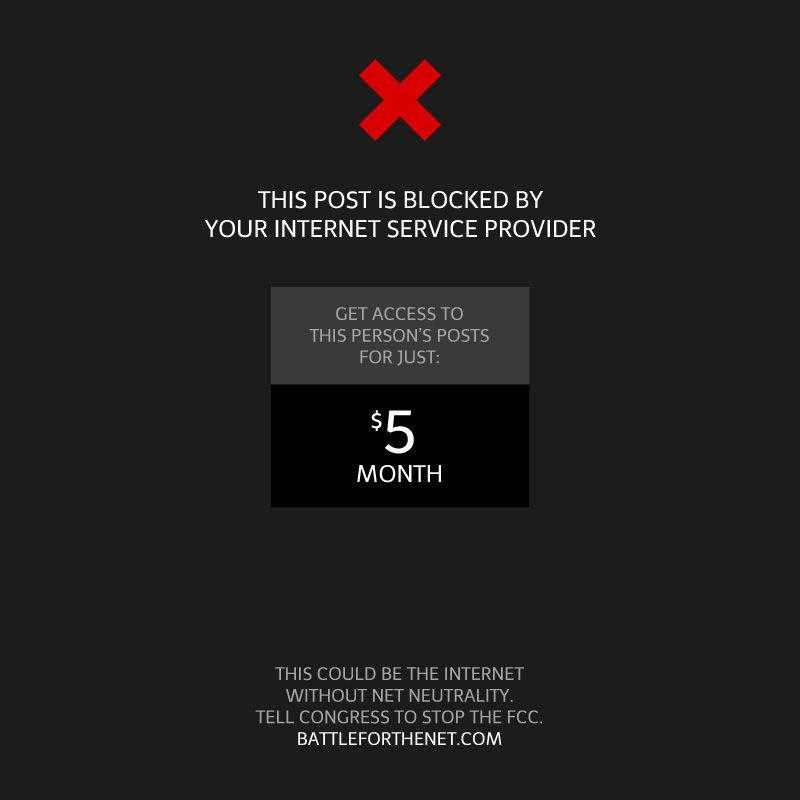 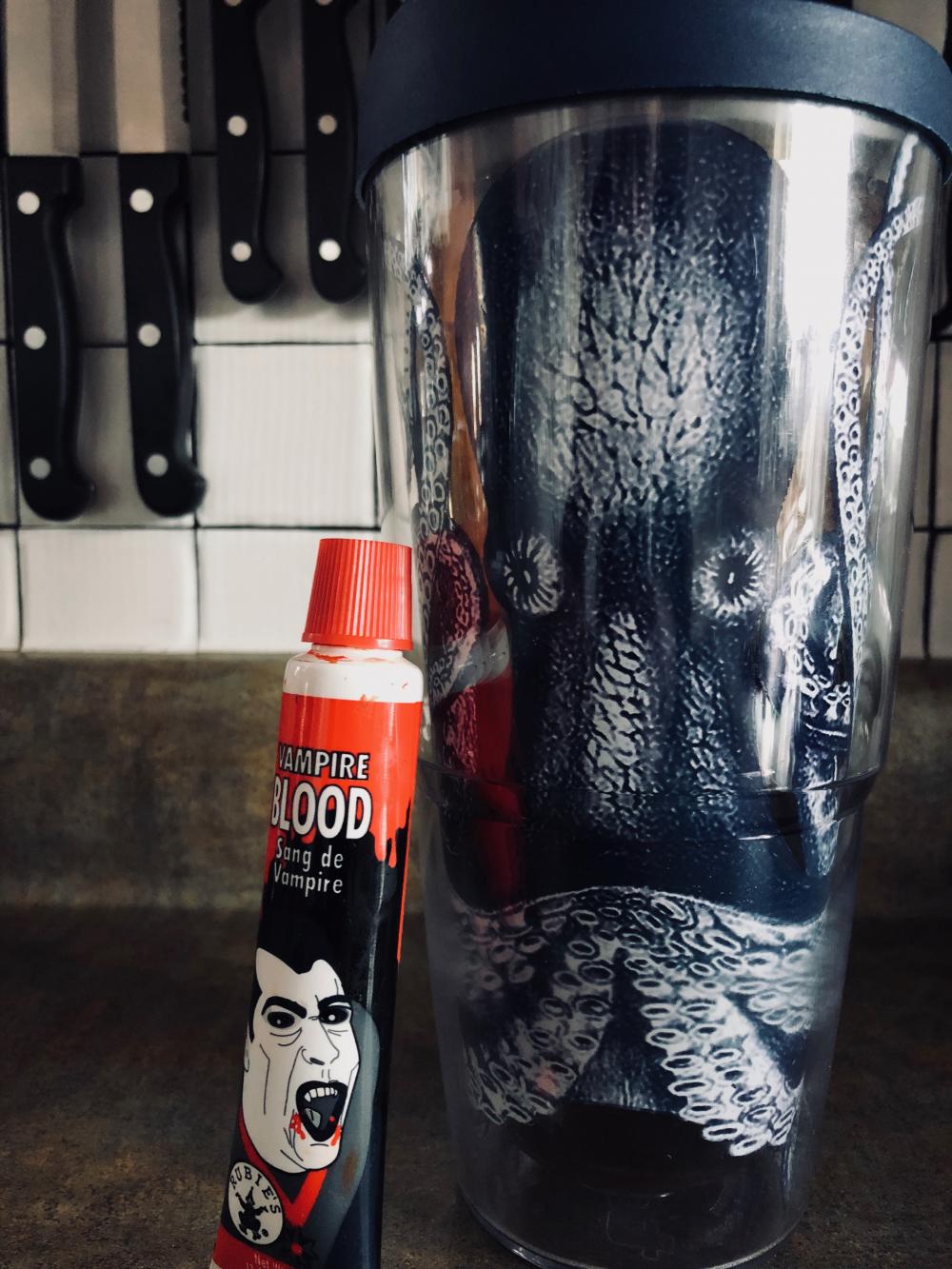 Some days do you ever wanna skip work, drink coffee from your octopus travel mug, put on smidge of fake vampire blood, and rearrange your house? I thought so.

I was 10 mins late to work tonight. 2nd time in 5 years. I wasn’t drinking coffee or anything. I just had ran out of my last fuck.

It’s easy for me to run out of those right before work. 😊

The FCC wants to destroy net neutrality and give big cable companies control over what we see and do online. If they get their way, they’ll allow widespread throttling, blocking, censorship, and extra fees. You can learn more at https://battleforthenet.com.

Okay. This is getting out of hand. 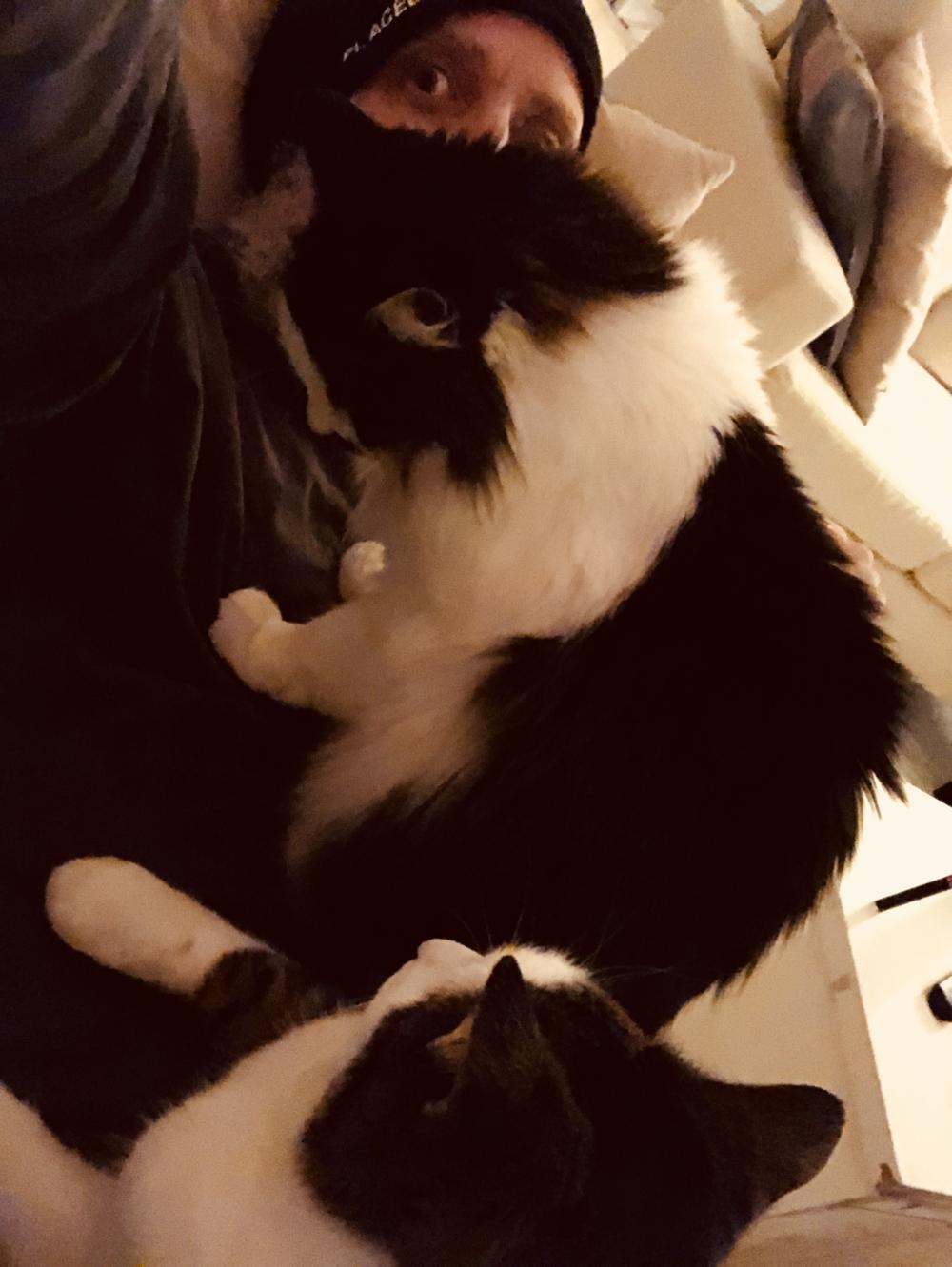 I kicked them off and now Mirah is laying over there by her lonesome. 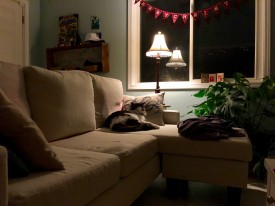 Now they’re both in bed with me. #neveralone 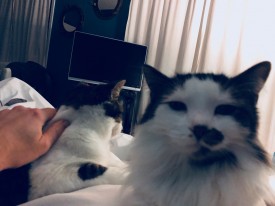 I see the same thing everyday with Eorr and the girls. Stella would like to sit on her kneck and Phoebe won’t leave her lap.

Plenty of suds in the sink 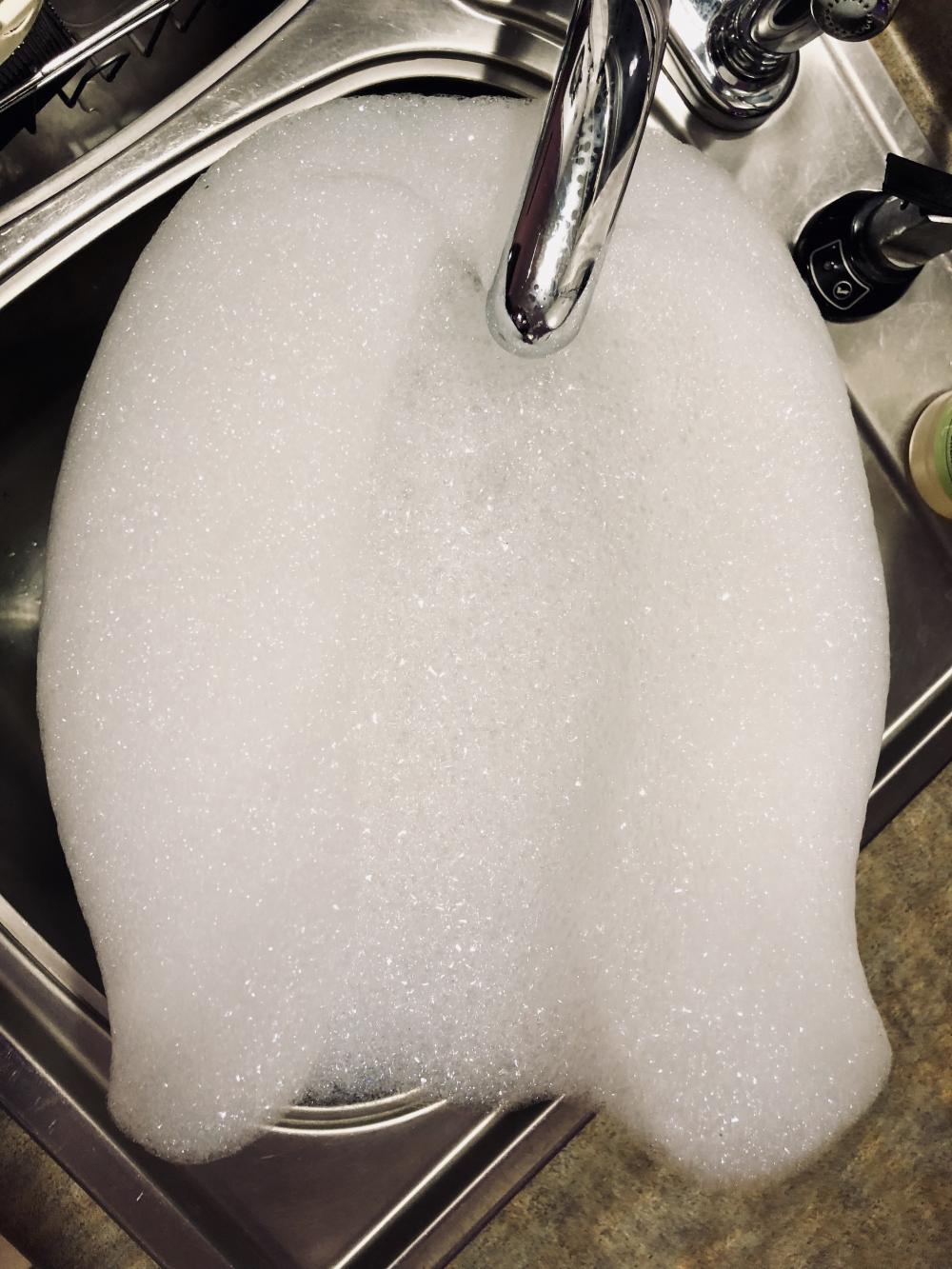 I have a tendency to “go big” when I do things.

I’ve got no choice really.

Pearl on my side 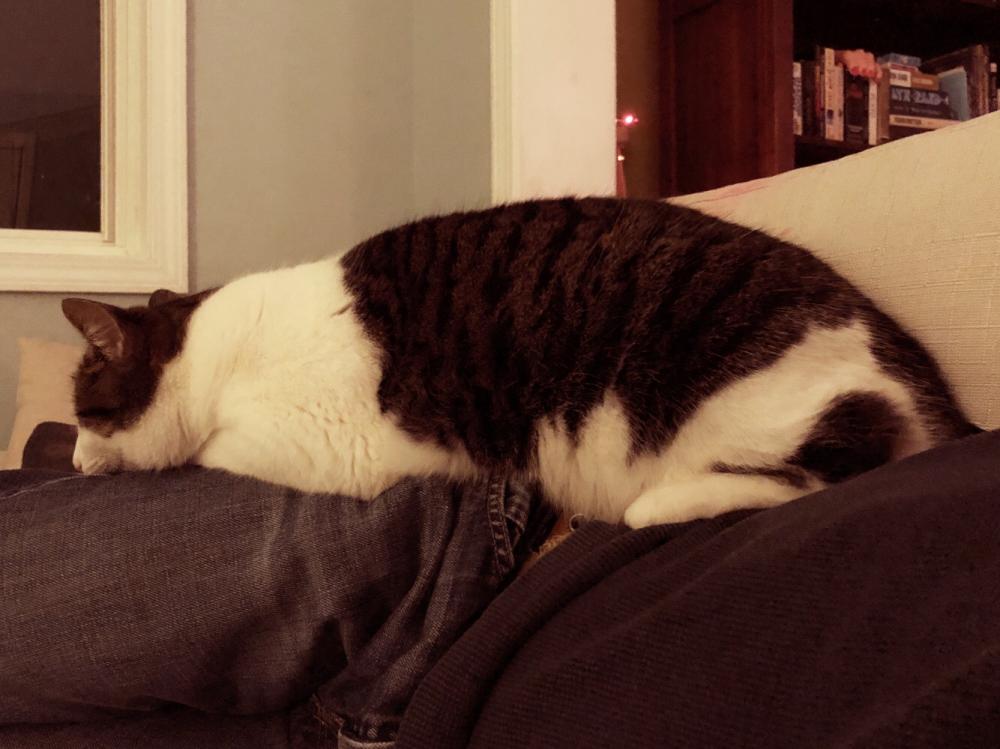 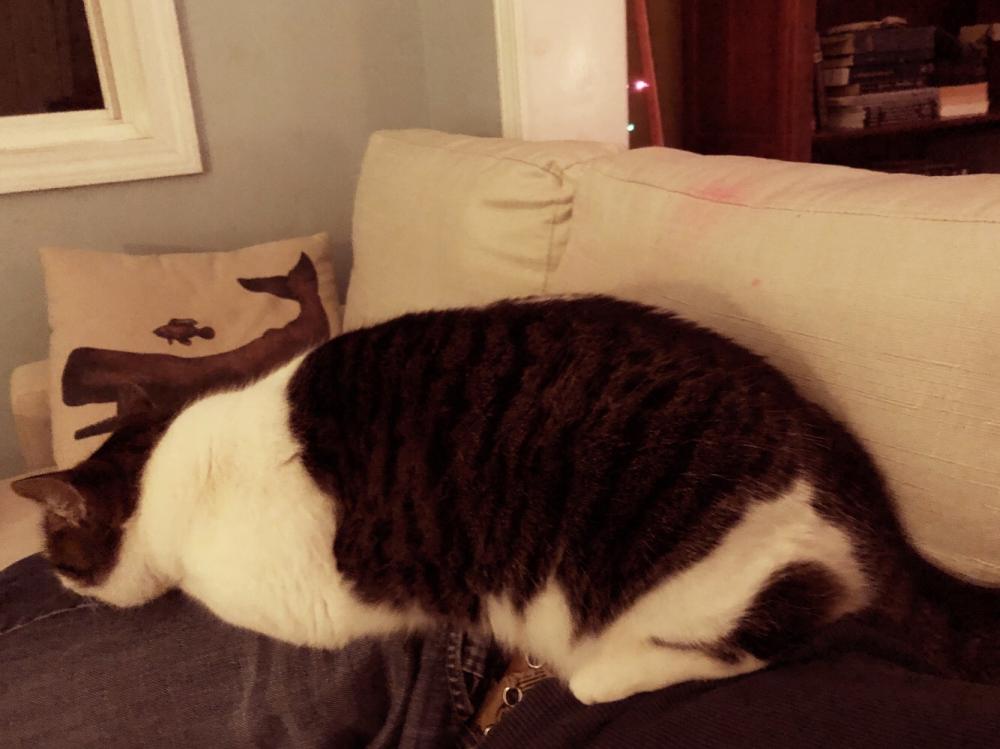 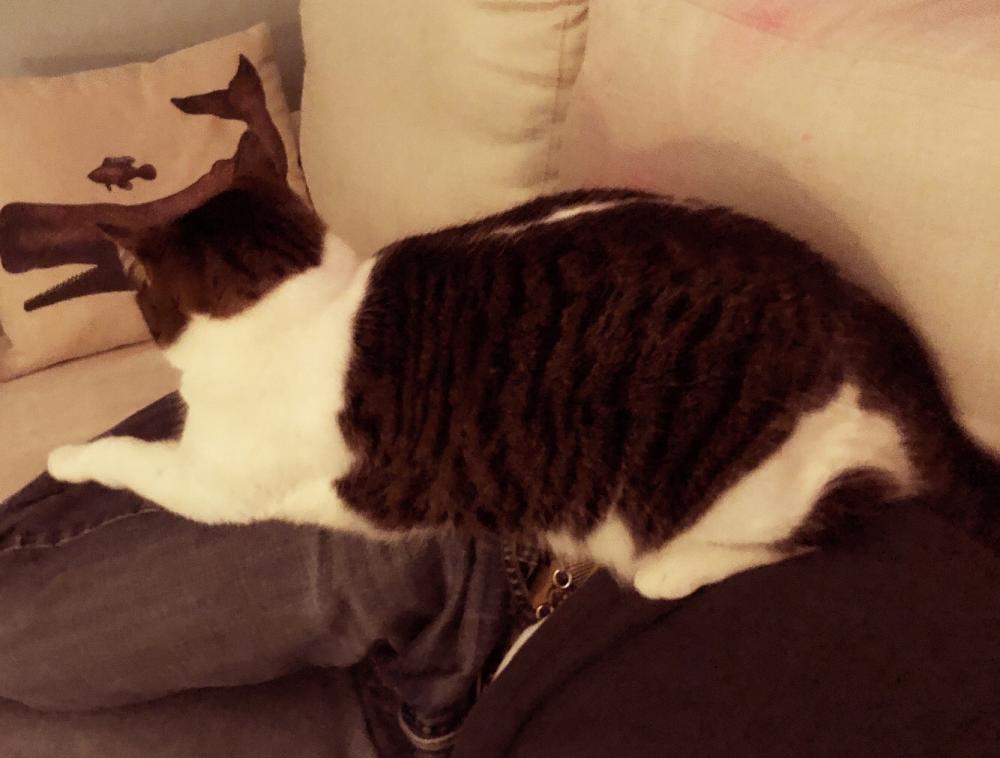 I once thought I could keep the cats off me by laying on my side. They don’t give a fuck. They lay were they want. 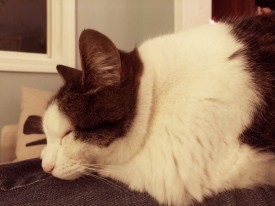