The 40-year-old was found dead on Saturday afternoon in a Chicago hotel room. Last month he told his 1000 followers on Twitter that he dreamt he would die.

“Dreamt i died in chicago next weekend (heart attack in my sleep). need to write my will today” Welsh wrote on September 26.

He made some cool art.

Savior by Rise Against 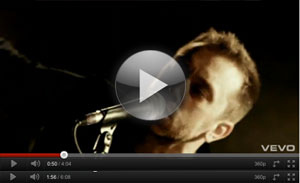 The video borders on corny but the song is good and the band is from Chicago so they got that going for them.

It kills me not to know this but I’ve all but just forgotten
What the color of her eyes were and her scars or how she got them
As the telling signs of age rain down, a single tear is dropping
Through the valleys of an aging face that this world has forgotten

And the day pressed on like crushing weights
For no man does it ever wait
Like memories of dying days that deafen us like hurricanes
Bathed in flames we held the brand, uncurled the fingers in your hand
Pressed into the flesh like sand, now do you understand?

One thousand miles away, there’s nothing left to say
But so much left that I don’t know
We never had a choice, this world is too much noise
It takes me under, it takes me under once again

What is that you fear?
Stagnation.
Stale breaths.

Boring mundane life whittled away to the shadows of midnight t.v. flickers.

I fear finding more stimulation in staged scripts and reality-based shows than in my own.

I fear missing out or giving up on any more life.

Once we find the key to nirvana, the bliss of ignorance is replaced by the bliss of enlightenment. And that key then must be ripped from our fingers if it is ever to be taken away.

Either that or we must be willing to put it down.

I fear not that someone would rip away the things I hold dear, but that I would, out of ignorance or stupidity or simple neglect, lay down my set of keys.

I fear the hollowing out and scraping along in the shell of a man who had given up. Losing all glimpses of a self that I truly enjoy. Losing touch with a man that I fought so hard to let go of so I could become him.

I fought for who I am with myself and now that i’ve wrestled me away from myself, I don’t wanna let me go. The hinting of this clenches my grinding teeth.

I fear being what I imagine the mundane people I went to high school with must be doing with their time.

I don’t fear rejection - I know too many people who admire me. I fear arrogance.

I fear growing old before I’m through being young.

I fear going too far and not being able to come back, letting go too much.

I fear feeling inspired and not having a handy medium.

I fear over-exposure, over exposing my film.

I fear not feeling good about what I’m doing, losing respect for myself, for my work. In truth, I am missing the work I used to be doing.

I fear looking out the window at a revolution.

I fear the magic not being home when I return.


Fuck the boogie man:
I am him.

While the impact of food ads on children is considerable, Ferguson said that parents “have an advantage if they are consistent with their long-term message about healthy eating.”

Talk to your kids regularly. About everything.

I totally agree. We talk to our girls all the time about almost anything and guess what? They love eating there vegetables, understand that it is ok to be different, and have a healthy outlook on life. Parents don't realize what an impact they have on their kids.

Best part about talking to kids is that they listen when you treat them with respect, like they're human beings and not subordinates.

It is amazing how many parents don't know how to talk to their kids. A little respect goes a long way.

How the crap did I miss these?

A non-fan speaks: Save ‘The Simpsons’!

Even so, I am adamant about one thing: Fox needs to do whatever it has to do to keep the show on the air for a 24th season.

I haven’t watched the Simpsons’ in years, I don’t know even know when it airs.. but I’d be a little sad if it didn’t. On the other hand, is it still popular enough to warrant the hundreds of Gs they’re getting per episode?

Pumped Up Kicks by Foster the People

Robert’s got a quick hand
He’ll look around the room
He won’t tell you his plan
He’s got a rolled cigarette hanging out his mouth
He’s a cowboy kid
Yeah, he found a six-shooter gun
In his dad’s closet hidden in a box of fun things
And I don’t even know what
But he’s coming for you, yeah, he’s coming for you

Daddy works a long day
He be coming home late, yeah, he’s coming home late
And he’s bringing me a surprise
Because dinner’s in the kitchen and it’s packed in ice
I’ve waited for a long time
Yeah, the slight of my hand is now a quick pull trigger
I reason with my cigarette
And say your hair’s on fire
You must have lost your wits, yeah

I love the simple drum kit.

These guys say it better than I can.

But the thing that struck me were his shoes, those famous gray New Balance 993s. They too were well-worn. But also this: fresh bright green grass stains all over the heels.

I wish Jobs had been a blogger, had written about his design process, so I could quote something. But he was the opposite of a blogger. Jobs was a mass communicator. No one in my generation has mastered the art as Jobs did. Today, with the outpouring of feeling on the net, are people mourning the man, or the phenomena he could unleash, just by saying “One more thing.”

Without Jobs, Pixar might never have broke free from Lucasfilm: advancing computer animation beyond universities and experimental film.

Stir with ice and strain into a chilled cocktail glass. Garnish with a Luxardo maraschino cherry or an organic cocktail cherry. Turn to face Cupertino and raise your glass.

It’s impossible to imagine the web as it is today without Steve Jobs in the story. Even something as seemingly simple as proportional width fonts might not exist were it not for Jobs and Apple, to say nothing of the WebKit project and dozens of other contributions.

Jobs authorized biography so his kids can know him via reuters.com

Steve Jobs, in pain and too weak to climb stairs a few weeks before his death, wanted his children to understand why he wasn’t always there for them, according to the author of his highly anticipated biography.

No one wants to die. via jessiechar.tumblr.com

Don’t be trapped by dogma - which is living with the results of other people’s thinking.

I first met Steve Jobs in the spring of 1977 when I helped the two Steves take a prototype computer out of Woz’s Fiat at a Homebrew Computer Club meeting. In the 34 years that followed I was hired and fired by Steve more than once, our relationship conducted in large part through screaming. “Sometimes I can be an asshole,” he said to me many times, and it was true, but I miss him already.

A year after it pulled the plug on silent updates in Firefox 4, Mozilla said it will debut most of the behind-the-scenes feature by early next year.

Assuming Mozilla pulls off silent upgrading this time around, it would make Firefox only the second browser to take that route. Google’s Chrome has been the poster boy for automatic updates that remove the user from the equation and can’t be switched off.

This the main beef I have with many of Google’s products - update processes running in the background and auto-updating whenever they see fit. I have no say with Google Chrome, it updates whenever there’s a new release. I don’t get a choice, I don’t notified, I don’t get anything - it just happens. Some people may like this but it borders on malware in some countries. Back before they shutdown Google Desktop, their help site said to shut off the auto-update, just uninstall it - the whole app.

Anyways the good news is Mozilla will let me shut this off. It is my computer after all.

PS: I’ve been using Chromium without auto-updates and I’m happy with it for the most part. You really have to dig for a Mac DMG though.

Booker T. & The MG’s performing Booker-Loo. The Memphis Group sure could play.