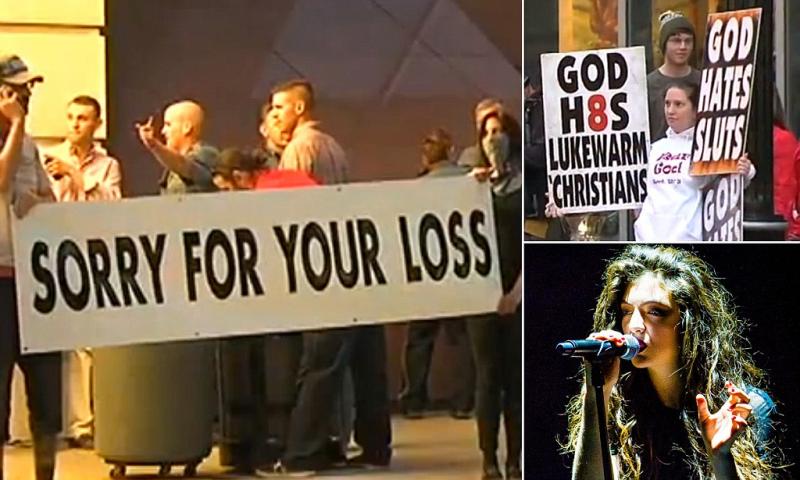 Members of the Westboro Baptist Church demonstrated outside the Lorde concert in Kansas City Friday night, but a group of counter protesters had a more powerful message.

‘Sorry for your loss,’ read a sign held by anti-Westboro demonstrators, referring to the death last week of the church’s longtime pastor Fred Phelps.

‘We realized that it wasn’t so much about antagonizing them,’ Megan Coleman, who helped make the sign, told KSHB News. ‘But sending out the countered (statement) that we are here for people who need that message and need that positivity.’

And if you haven’t seen any of Game of Thrones, drop everything and binge it now.

In related Google searches: this.

w00t!! Now that the Walk Dead is over until the fall, I'm stoked to have another series fill it's spot. We binged the first two seasons of Thrones in a week and took in the third as it came out.

Brienne has got to my favorite character .. http://en.wikipedia.org/wiki/Brienne_of_Tarth

Xylem Up by D Numbers

I’m tired. Sleepy. Zero work motivation. And when I’m in this state, I tend to get grumpy, easily agitated.

During periods such as these I tend to gravitate toward these kinds of beats:

This is generally how I see myself when I look in the mirror. 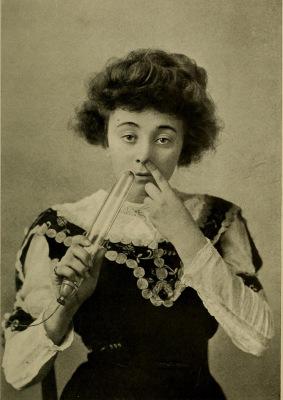 i pluck my nose hair. i cant' stand 'em and i've done it so much that i'm numb. i rip out huge hunks of hair at a time and don't even flinch. same with my ears. stay tuned for further updates and overshares. i'm growing some 'rhoids that'll need their own page soon. i got my eye on her technology to work a little magic on that area of anatomy.

I always feel ten years younger after I shave my head. Plus, I can run faster.

Reminds me of when I was a kid and got new sneakers. Always ran faster.

As far as hair goes, each cut or beard trim uncovers the greys. I'm a distinguished gentleman. :-D

my nose hair is so out of control that i can breathe better after a thorough plucking. it's getting so bad i have to use bobby pins on my eyebrows so i can see the screen here at work.

This is a Trent Reznor song

It takes a certain talent to spoof a band’s style without coming off as corny or idiotic. It takes a master to build on that spoof with the perfect accompanying video.

Perfect indeed with not only the music and lyrics but also the dances moves, the gripping microphone and head shakes.

you probably didn't know, but in a period when i wasn't communicating with you very much, i was hanging out with a buddy who like the NIN. i was getting high, etc, and we watched a NIN concert video.

this parody was so spot on. i wouldn't have been able to tell the difference. 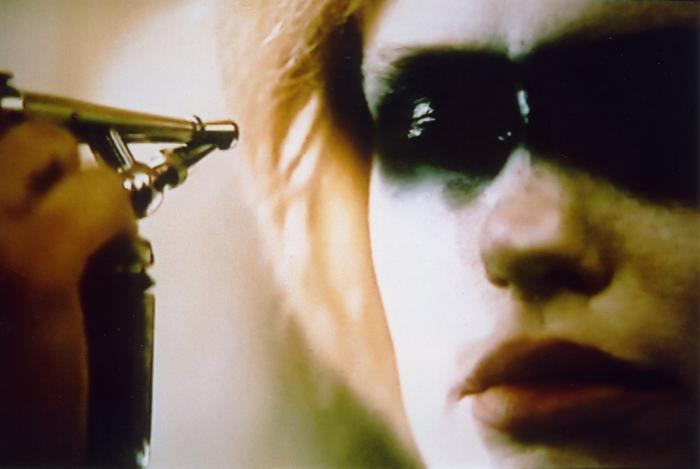 People can’t shine when they’re standing in somebody else’s shadow.

A video that appears to capture the moment a CTA Blue Line train jumped the platform and landed on an escalator at O’Hare International Airport has become an overnight YouTube sensation.

The video — which seems to be from a security camera — shows two men talking atop the escalator as the train pulls into the station. Both flee when they see the train catapult up the escalator.

The Chicago Transit Authority would not confirm the video’s authenticity. The National Transportation Safety Board did not respond to requests for comment, but plans to hold a news conference later today.

Interesting choice of the words “appear” and “seems to” when describing what is obviously happening.

I was crossing my fingers, hoping Keanu would jump out Matrix cartwheel style.

in health care we are trained to use "appear" and "seems". i'm sure it must be the same in legalese as well.
for example, "it seems O.J. tried to cut off her head and was caught fleeing the scene of the crime." since 12 reasonable people couldn't come to the same conclusion it only "seems" he got away with murder.

I might train myself to start using those words around the house. ;-)

Our ever reliable sources (same folks who told us about Rocket Raccoon) are informing us that while Harrison Ford might still play Indiana Jones in the next film of the franchise, the window of making that happen is getting smaller and smaller.

There is a date and if Indiana Jones 5 is not moving forward by then, the studios are 100% prepared to recast a younger Dr. Jones and ready up a new trilogy.

Don’t think of it as a reboot but just recasting the same way the James Bond (Sean Connery, Roger Moore, Pierce Brosnan, Daniel Craig) movies have been doing for the better part of five decades.

And who just might be one of the actors that the studio is looking at ? The word is that they are looking at several but Bradley Cooper is at the top of the list.

While I am usually against rebooting franchises just for the sake of doing it, in my opinion, Indiana Jones is long overdue for a reboot. Or, should I say, a simple recasting (and definitely not a remake of an existing film; I think anyone who attempts to remake Raiders of the Lost Ark who aren’t a group of little kids deserve to fail.) Indy was conceived by George Lucas and Steven Spielberg as the American James Bond, and 007 has been played by six actors now over the course of fifty years […] It’s time this generation had their own version of the estimable Dr. Henry Jones Jr. to call its own.

Just let Dr. Jones rest in peace, he doesn’t need to go the way of Bond. We don’t need another sequel or reboot or revamp. It’ll kill the magic and spoil the legacy.

This generation doesn’t need a version to call their own, they need their own hero.

The Indiana franchise is huge but must everything be milked to the point of zero credibility?

there've been some movies in recent memory that should go on an "Apology Tour". the most recent "Indy" offering is in the top five.

the fiasco that was "Lone Ranger" was at the top of the pile.
the "Lone Ranger" didn't act alone though. i had Great Expectorants.

tom cruise's "Oblivion" was a waste land of plot.

but, i must be the only one who thinks james bond aged well. i thought roger moore was the low point, and i only tolerated pierce brosnan (i can't talk about why) but Daniel Craig had some of the best 007 scenes ever.

i'm looking forward to enjoying the Indy franchise wherever it takes me.

I can't comment on the recent Bond films though since I haven't seen any since Roger Moore left the service. That wasn't anything to do with the actors to come, just never got around to seeing them. The Bourne movies were decent, watch-in-bed as well.

However.. There are a handful of movies that I saw as a kid in the theaters on opening night and I 'spect that no matter how good the remakes would be, I couldn't/wouldn't get past my personal attachment to the originals. I'd protest any Ghostbusters remake even if Murray was headlining. :-)

There are a couple re-vamps that stand out as well done: The Star Treks and Burton's Planet of the Apes. Both exceptional.

i loved jason bourne's girlfriend in the first one with matt damon. i can't remember her name or place her in anything else but she needs me desperately.

i'm talking out of school but eorr loves pierce brosnan. and george clooney.

"watch in bed?" — meaning that I would watch them in bed on DVD or something as opposed to spending money to go to the movies.

yes, i understood. i was just saying i'm crushing on franka.

Jimi, this Bowie’s for you 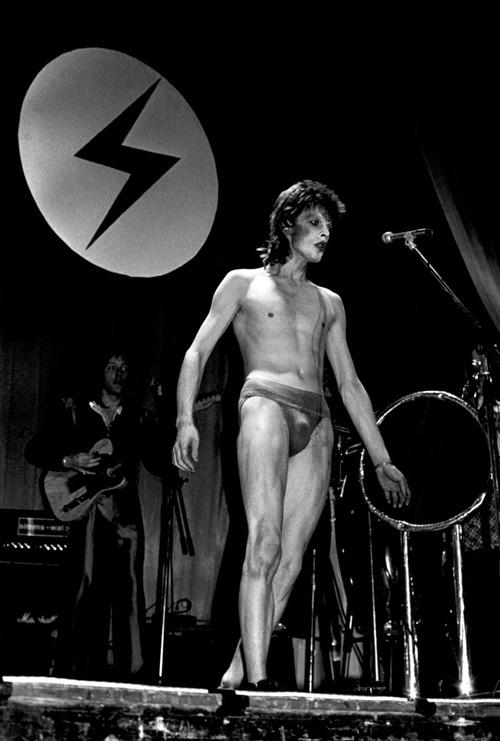 That crotch has its own gravity field.

How odd is it that when I posted this I was focused on the lightning bolt in the background and not his command module? O:-)

i can't remember if this is the ziggy stardust show or the tour after. hard to see but the bolt is supposed to be on his face as well.
love the b/w photography.