← You can’t dump that there

For whatever reason the Chicago Tribune left newspapers on my sidewalk for three days in a row. I like that because reading the paper from start to finish broadens my horizons. I come across articles and the like that I wouldn’t have sought out on my own.

Like this particular Dear Abby-ish piece about a couple that was having a fundraiser with the funds coming from a cash bar. Another couple had shown up with their own wine and proceeded to drink out in the yard or something.

So then the columnist’s advice was to just bluntly ask them about it. 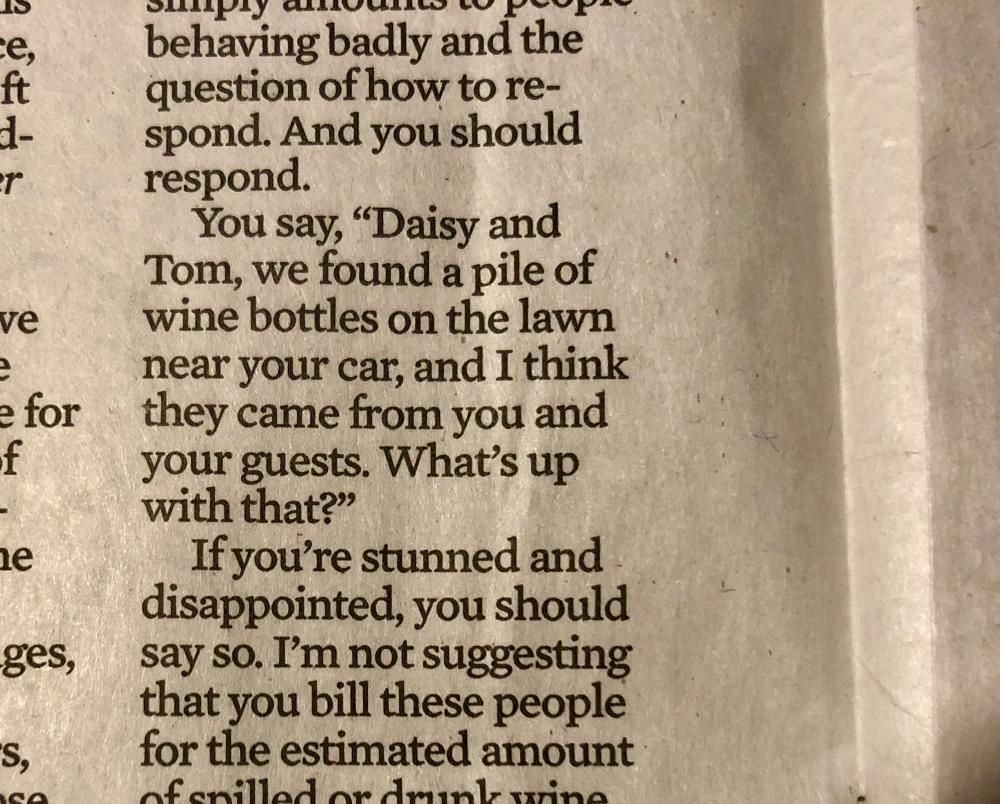 “Daisy and Tom, we found a pile of wine bottles on the lawn near your car, and I think they came from you and your guests. What’s up with that?”

The thing I like most about this was the such few words the columnist offered to the person who wrote in. It wasn’t War and Peace, it was two sentences.

Here’s what you did that upset me. Why did you do that?

When I have something to say to someone about something they’ve done I can get nervous. And when I get nervous I can talk too much. And talking too much dilutes and pollutes what I’m trying to say. Those extra words make the conversation harder than it needs to be.

Emotionally tip-toeing around the subject can put me on the defensive with an aggressive person. It can give them the upper hand since the spotlight is on me and my nervousness instead of on them for what they did in the first place.

Confrontation isn’t easy for passive people like me. I regularly deal with a guy who’s consistently combative, who’s in it to win. Well, he’s in it to be right. At all costs. Whenever he gets a chance to be “right” he stomps the gas, squeals and smokes his tires, and barrels ahead full throttle. He swerves all over the road with pure emotional adrenaline fueling his words and actions.

But back to my point. Me calling people out has never been my strong suit. I don’t like it. It makes me uncomfortable. I want other people to feel safe and I want to feel safe as well.

And then the cosmos goes and puts me in situations that make me uncomfortable, to teach me things I need to learn. And often it seems as if those same lessons come up again and again until I do get comfortable with them.

The good news is that when I need to confront someone, I don’t need to minimize or maximize what they’ve actually done. I just need to be clear, concise, and direct. Just like the columnist suggested. It made me feel good reading her article, too, to be reminded again that this struggle is real for a lot of people and not just me.

Confrontation is in the same realm. What is it that I need to say? Once I figure that out then all that’s left for me to do is say it.

I tell this Microsoft story now and then because it gave me a little spiritual insight. It changed everything.

One afternoon I overheard a conversation between a sales guy and his boss. The salesman had had a hard conversation with a customer and it frazzled him. He was still upset when replaying the conversation to his boss. The boss said to him plain and simple, “you need to take the emotion out of it.”

Now that’s in the true spirit of detachment. I don’t have to get all emotional about things. I make situations worse when I do. I only need to take a minute to regain my composure. Then simply state the obvious. It doesn’t hurt for me to first say a little prayer either. Tapping into the universe will give me all the strength and courage I need in hard situations.

Moving from someone who’s anxious to someone who’s confident has a lot to do with me just getting fundamentally okay. My past can hold me back in the present so letting go of my garbage from yesterday frees me up to be fully present and able today. It frees me up to confront roaring lions and noisy drag racers.

But still… I’m only human.

So yesterday I got a little cranky with one of my neighbors. There’s a retention pond behind our houses and she’s gotten in the habit of dumping her lawn refuse under one of the retention pond’s trees. And then when I look out my back window or am in my backyard, I see a big pile of her yard garbage.

I don’t get how people can be so selfish and it pisses me off to no end when that spills over onto me. What is it with these people? It’s always me, me, me. It’s like the other neighbor and her little barking dog. Why does she let him be outside barking all the time?

Anyway, yesterday the first neighbor and her wheelbarrow of yard bullshit were headed over to the retention pond. It was the first time I’d literally caught her in the act. When she saw me, she and her wheelbarrow did a 180 back toward her yard. I pointed to the spot she’s been dumping and said borderline belligerently, “you can’t dump that there.”

Oops. I came across more aggressive than I would’ve liked. Definitely had some punch in my words. Too many times seeing her trash pile, though, and then I was blurting belligerence before I knew it.

And that’s where I went wrong in yesterday’s confrontation. I shouldn’t let emotion build up until it comes spewing out. Most importantly, I should never be an asshole when confronting someone. I need to “take the emotion out of it” first.

It’s true that sometimes people need to get a little feeling in their scolding. Seems like it motivates them a smidge more when they know what they’ve done has really gotten on someone’s nerves or hurt their feelings. But still, everybody is human and even though some are selfish, most people are walking around as clueless as me.

What I should’ve done (long ago) is simply knocked on her door and said, “Your yard debris belongs in refuse bags and not under that tree. Please don’t dump it there anymore.”

Yeah, that looks good on paper but I don’t know if I’m that spiritually advanced.

Going to someone’s house is a nice idea and all but most likely something I’ll never do.[2] I’m not that guy. I’ll never be able to bench press 200 pounds either because that’s not the kind of personality that I have.

But even if I never get to be the guy who walks up and confronts a neighbor assertively after the fact, just knowing that’s the loving and true way to handle those situations, makes me a bigger person. Just “knowing” even if we’re not capable of always “doing” puts us on the right spiritual path.

And I’ve had above average success confronting people when I just make my point in a loving manner. I’m grateful that the people in my life aren’t jerks, don’t mean to be an asshole anymore than I do.

Believe it or not the majority of people are receptive to hearing that they’ve made a mistake. And then they feel bad just as I do, just as we’re all supposed to when we screw up. Dropping the ball is all part of being human. It’s how we learn and grow and become better people, become more than who we’ve always been.

The Force will be with you. Always.

That was really insightful I needed read that

Glad you liked it! It’s been a struggle my whole life