← Proof would kill me

A year or so after I got divorced from my first wife one of our mutual friends said to me, “I’m so sorry that she cheated on you with John.”

Now I always had a gut feeling about that but never knew for sure. Until then.

The moment Heather said it I was just crushed. Even more so because I wasn’t really that close with her, she was just a friend in the restaurant Kathy and I both worked at. Heather had asked me a few minutes before how things were going after the divorce so her words didn’t come out of the blue. But the confirmation was still a stab, twist, gouge to my soul. And then she felt really bad because it was obvious I didn’t know.

And then I wondered how many other people knew. It’s one thing to have close friends know about your heart breaks and betrayals but it’s a whole new level of embarrassment when people from outside your inner circle get privy to things like that.

Jobs and co-workers, well, we know a lot about each other because we spend so much of our lives together. It can almost feel like high school with the secrets and the gossip. Heather was a good person though and she only said something because she cared. My other close friends at work, I wondered how many of them knew and simply didn’t say anything.

Kathy and I met in that restaurant. We were both really young. I think she was 19 and I was 21. We were just a step beyond high school really.

And there was this guy named John that used to come and sit at the counter, drink his coffee, and eat or whatever. Gab with all the servers and the like. I may have had a twinge of jealously because I was 21 and he was in his late 20s or early 30s, a full grown man with a career and house and muscles and all that. But it never really bothered me because he talked to everybody and not just Kathy. I never saw them interact in a way that was different than how he interacted with everybody else.

But one time I came around the corner and I saw John and Kathy together by the front door. He was turning to go and they’re holding hands with their arms reached out as if he’s leaving and this is a good bye, a longing farewell. And it’s very romantic between them, with him going and her not wanting him to. The look on his face and from what I could see, the look on hers was a love between them that I had thought she only had for me.

And in that instant I knew it was something more than just chitchat between them. In that moment I had one of the worst panic attacks of my life. One of the ones where I was paralyzed with fear, unable to move, heart thumping so loud I could hear it in my ears. The world had just came down and crushed me with a truth I was oblivious to. The unseen things from left field, the ones I didn’t see coming, those always did the most damage. There’s no way to brace ourselves for the surprises that change everything.

Anyways, John probably saw me out of the corner of his eye but he turned and left and Kathy walked away in another direction.

What I did was shutdown. On her. For the rest of the time we were together. We got married later even though I had completely detached myself.

Bad shit had happened my whole life and this was just more bad shit happening. And I knew how to pretend like bad shit didn’t happen. Childhood stuff can fuck you up for a long time.

Anyways, that whole romantic scene between John and Kathy was one of the biggest times in my life where I should’ve said something but didn’t. I stayed in way too many relationships with the bad shit happening because I’d never learned confrontation.

Denial though that was easy. I didn’t say anything to her. Not a word. And what’s more I didn’t want to face the truth that she wanted somebody else and not me. That I was lacking in some way, that I wasn’t enough.

See, proof that I’m not enough would kill me.

So now when I think about that moment some 20 odd years later it isn’t a strong hurt that I feel but I still feel some betrayal however minute it’s still a little tiny thorn. I’ve talked about it before so it’s not some big secret. And yes, it took a Fourth and Fifth Step and lots of prayer to be able to move past it.

So when Heather told me a few years later that Kathy did in fact cheat on me it was devastating on many levels.

But the real part of this story is that I was really upset for a day or so, totally felt all the hurt and anguish and heart break. And then the pain stopped.

It felt kind of weird because I lived my whole life clinging to and perpetuating pain, carrying it around in my back pocket like it was a secret note to myself, one that reminded me people were not to be trusted, that people will hurt you.

And for it to be gone I didn’t know what to do. Every now I would think about it accidentally or not to see if something was still there but after doing the right thing, feeling all of that, talking about like we’re supposed to…it went away.

There comes a time in some people’s lives where so much bad shit has happened that pain and hurt are normal everyday things we feel. And then life can feel abnormal when we don’t have that pain, when it no longer defines us. Even more, pain will hurt once we stop being numb to it.

When we take the higher road, reach for new heights, strive for more than the day before, go above and beyond who we’ve been then suffering will no longer taste good. We’ll think more of ourselves, know that we deserve more than day in and day out torment. Not only will we think that, we’ll feel it, know it to be true down to our inner most selves. Bad shit happening will become unacceptable.

Looking back on all that shit with Kathy now I don’t have any solid feelings about it really. I don’t care either way. I mean it happen, it’s part of my story but more than anything I’m like “whatever.” It makes no difference in the here and now, has no bearing on my life other than going through all of that has made me who I am today. It’s one of my lessons, was fuel for one of my spiritual growths. It’s made me bigger, a more complete human being.

Ya know, I used to drink so nothing could touch me.
I’ve found that the real way for nothing to touch you is to just deal with it.

Here’s an accidental photo my iPad took while I was preparing to record the video. 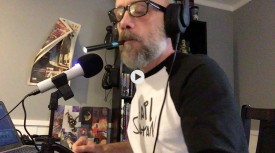 Yep stuff that happens when you’re a kid really gets burned into who we grow up to be. Sometimes it takes a long time to change that.

Its interesting because I never thought my “childhood stuff” was enough to talk about - bother with. I had never been sexually abused or hit or anything. I’m learning in just this past year - that I never really learned how to feel. It wasn’t allowe…See More

Yep, there was a whole lot of that “don’t talk, don’t trust, don’t feel” stuff going around at one point. Jung put it best with his thoughts on the “shadow” and how denying that, denying what’s inside us (feelings and the like) is the true act evil and not the shadow itself.

For sure! It’s all too easy to ignore the truth when we’re blinded by emotion. :)

I was too .. blinded and used as a punching bag . He didnt work and I had all the bills to pay and baby to raise .