← Here’s what happens when you unfriend someone 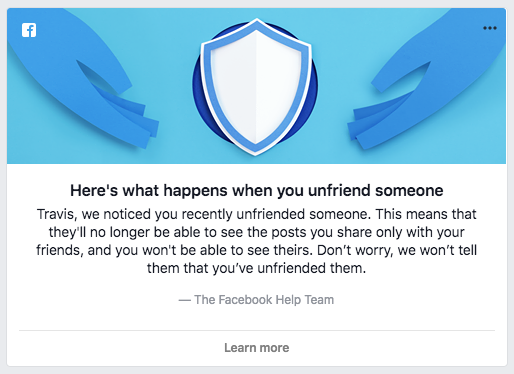 This showed up on my timeline just a little bit ago.

So Facebook “noticed” I unfriended somebody. I highly doubt if they just “noticed” anything. They KNOW our every move people. They track and follow said movements even when we’re not on their website or using their apps.

These social media overlords go so far as having shadow accounts of people that don’t have real, actual Facebook accounts. Oh yeah, it’s true. Your dead cousin who died back in 1996? Yep, he’s on Facebook but only FB knows this. Well, Instagram knows, too.

So they both know he was your cousin and that you guys went to Guacamole once for Spring Break. That’s what happens when you upload your contact list to Facebook. Don’t ever do that again.

“Noticed” — ha. They make it sound like Wimpy just noticed a hamburger on Tuesday. Facebook don’t just “notice” shit. They prob predicted I was gonna unfriend Sally days before I even considered it. They got their Machine Learning™ that studies who and how often I unfriend people and then use the algorithms to tie it all back to my dead cousin, Vinny.

Next their post says, “This means that they’ll no longer be able to see…” What am I five? I know what the hell happens when I unfriend someone. That’s why I unfriended them.

And then that last sentence, “Don’t worry, we won’t tell them that you’ve unfriended them.”

I’m surprised they didn’t throw in, “but we could.”

And finally, this team should change their name from “The Facebook Help Team” to the “Facebook Hamburger Helper Team” — at least that’d make more sense.

And what’s with those blue rubber gloves with the finger tips cut off?

You will be great at it

I would have to host AND star though.

Continuing with the black and white musical theme, I’ve been…