My ex-wife, Kathy, was in my thoughts earlier tonight and then as I was running some evening errands, this song came up on my music’s random shuffle.

Kinda weird because this CD was hugely popular at the height of the chaos that was our marriage in 1996. Me — cooking nights in a restaurant, her — assistant managing days at the apartment complex we lived in. We barely saw each other.

Right before the divorce, I hadn’t talked to her in almost a week.

I have a hard time even listening to the Toadies, there’ll forever be an association burned in me between the two. Between her and crunchy Texas guitar. Graph theory anyone?

I said to jimi earlier..

Another pattern I’ve noticed — after the initial high of the relationship wore off, I’ve always went into panic mode, that she (whoever) didn’t love me as they once did, that the relationship was obviously terminal. And then I acted accordingly.

Hell Jim, Kathy only wanted to love me, have a house… And after we moved to Des Moines, I turned antisocial on her.

Um, yeah, there was no more happy face.

On with the show..

The Toadies were one of the few bands that I could’ve and didn’t see live, that I bonded with both the lyrics and the music. Maybe someday I’ll call Texas my home like the Toadies. :)

I sometimes think of the friends of that chapter of my life. There were good times… in the garage at midnight, me strumming acoustic with James and Wendy singing vocals. My black 1984 mustang (with t-tops) parked outside. Her asleep inside because she wouldn’t listen to “that shit.”

i actually searched on found my first ex-wife on FB just about a week ago. i didn't look for the pics other than the one on her front page. it was odie from garfield.

i don't remember why i searched her. i have less than zero feelings/thoughts, hell, even memories of her.

i don't recognize myself from that time.

there is another ex that i have diligently stalked and found very little hard info on. she's into the meth, and i was always into the —-, well, opposite.

i have no reason to lie. i would own it in a second if it were true. meth is the only drug i've never tried. never even wanted to. it's is the opposite of how i want to feel.

reverend?
there i go again on the above post.
i need to think safety first.
although i can and will pass a drug test anytime anyone wants, some people are unappreciative of the colorful history thesaintjamesversion.

Well, I'm glad I'm not the only one looking up their ex-spouse on Facebook. I think there's something alluring about the no-consequence stalking that Facebook enables.

j: Nothing wrong with a little extra details now and then.

k: Nothing wrong with a little peek in the Facebook toilet now and again to see what people from the former lives are up to.

In other news, sometimes I have the site ping twitter.com and with one sometime, this happened: 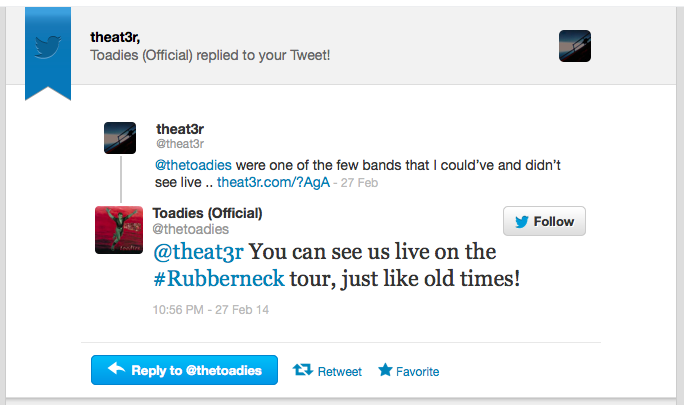 Look Away by Chicago

You Can Call Me Al by Paul Simon

https://www.youtube.com/watch?v=uq-gYOrU8bA Peeps, I can call…

Mad World by Tears For Fears